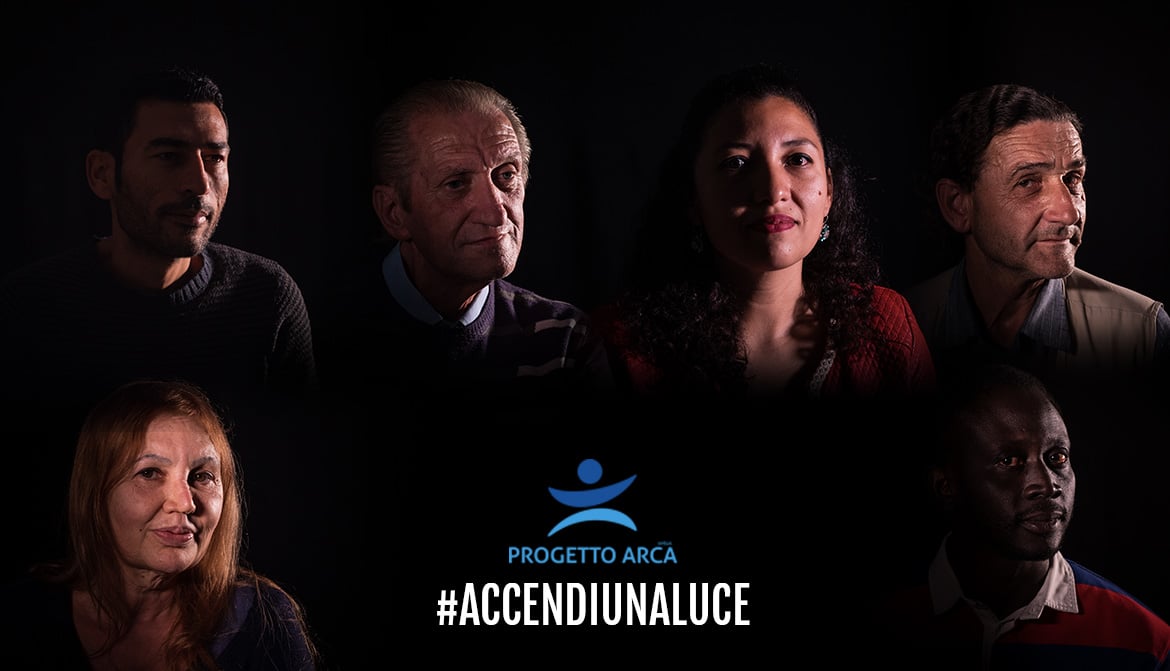 The Christmas Novel 2018 is a special story. A story that begins a long way away. A story in which many stories and many lives are intertwined. The lives of people who live in isolation and poverty, lives suspended in a social blackout, a darkness that prevents them from taking action or reacting.

The Progetto Arca Foundation has been working hand in hand with some of society’s most vulnerable and marginalised people for 25 years, offering them a safe place to stay, the comfort of a hot meal, someone to talk to, and medical care.

Homeless people, families suffering a financial and housing crisis, people with addictions, and asylum seekers trying to grasp a second chance at life. Progetto Arca helps all these people without ever discriminating so that they can turn their light back on and build a future in which they are independent and socially integrated.

It was exactly a year ago when the Progetto Arca story intersected almost by chance with the story of the Connexia creative agency which decided to launch the initiative XMasPitch during the traditional period of seasonal Christmas greetings. Connexia turned the tables and invited its clients to do a “Christmas pitch” with a mini “social” brief involving a charity or a non-profit public benefit organisation that was in some way close to their hearts. The agency set up an in-house jury to sift through the many bids that rolled in. They finally chose a proposal from Elior Ristorazione, a global player in the contracted food and support services industry, which has always focused on sustainability and combating waste. And so Elior’s claim “The taste for real, practical and shared sustainability” opened the doors to some common ground and Progetto Arca won a digital creative campaign produced by Connexia for free.

This succession of so many different, unique stories gave rise to #AccendiunaLuce (Turn on a Light), the digital fundraising campaign devised by the marketing and communications consultancy agency Connexia for Progetto Arca to raise people’s awareness and engage them so that they would choose to make a gesture of solidarity at Christmas and turn the light of hope back on for someone who can currently see no way out.

Six weeks of online planning began on 22nd November for a multi-subject campaign that tells the stories of lives suspended in the dark by loneliness and marginalisation. Connexia gives a voice to the voiceless, supporting Progetto Arca as it listens to, protects and helps those in need.

The #AccendiunaLuce campaign revolves entirely around the dualism between light and dark. Each one of the creative ideas devised by Connexia takes you to a dedicated landing page, divided into three sections. The first explains the concept behind “AccendiunaLuce”, the second reveals and gradually illuminates the faces and stories of the fifteen homeless people who have agreed to put a face to the hardship and loneliness, and the third presents the Progetto Arca Foundation’s mission and explains what the project hopes to achieve.

“At Elior, we are committed to raising awareness about using resources more rationally and reducing food waste so we can make a positive impact on our planet,” said Rosario Ambrosino, the CEO of Elior. “For years our group has been working on the issue of food surpluses with a range of initiatives: circulating stocks and distributing products nearing their best-before date to no-profit organisations are just some of the practices we promote to prevent food wastage. We also help the Progetto Arca non-profit public benefit organisation by distributing food and drink so we are delighted to be supporting this initiative as it gives us yet another opportunity to give them the help they really need.”

“If we want to make a positive impact on the society and environment in which we live, if we want to play a significant role and be truly relevant, we need to step up and do what we can as individuals and as private businesses by being sensitive to others and willing to offer our expertise,” said Paolo D’Ammassa, the CEO of Connexia. “Connexia’s pro bono work could have been a simple style exercise by our creatives, but our team was bowled over by the mission of Progetto Arca. We were awestruck by what their volunteers do and touched to the core by the stories of those who inadvertently find themselves in the dark. Our young talents found themselves dealing with a quite unexpected side of humanity. We invested what we know how to do best so we could help Progetto Arca to turn on a light. And in doing so we have learned so much.”

“We’re very grateful to Elior and Connexia for their hard work and willingness to help,” said Alberto Sinigallia, President of the Progetto Arca Foundation. “They truly believed in this project with us, giving us their time and expertise and being sensitive enough to listen to our stories and then “translate” them into words and pictures.

At the heart of this campaign are people with an extraordinary capacity for resilience. No matter what has happened in their past, which is often very painful, they all express a powerful desire to be able to turn their light back on so that they start to hope and live once again. What we do is to believe in the potential of the people we meet and help them as they embark on their new project in life.”