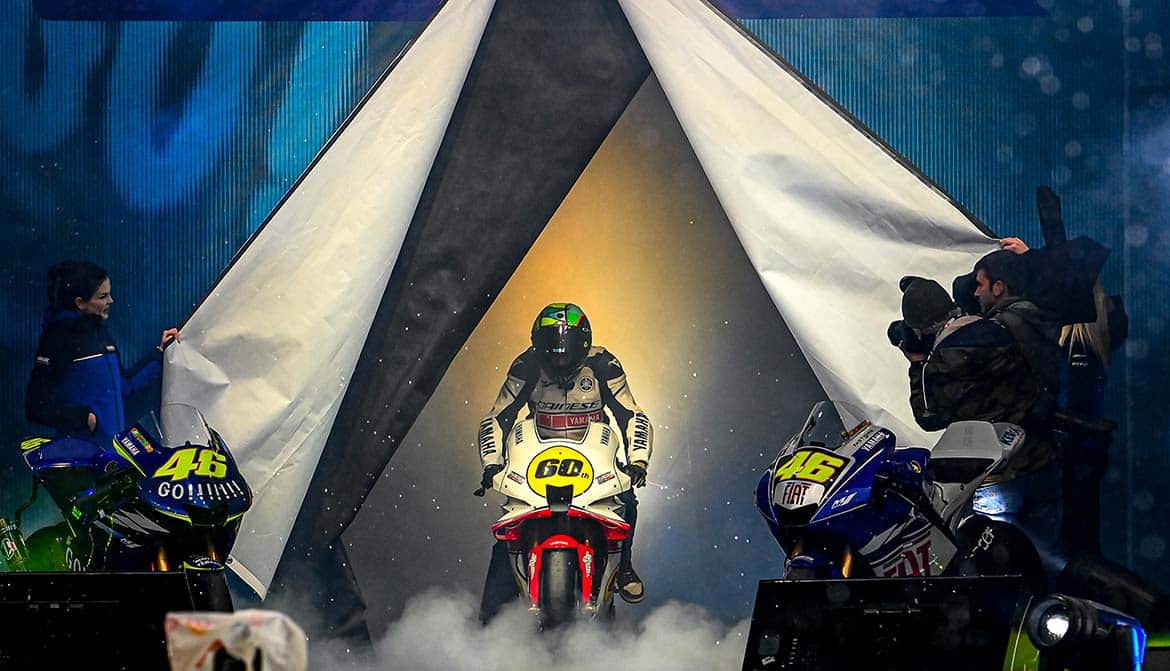 Emotions were running high during the “One More Lap” event, created by the Milanese agency Connexia for Yamaha Motor Europe and held in the MotoLive Arena at EICMA 2021 (International Motorcycle and Accessories Exhibition). Surrounded by his adoring fans, 9-time World Champion Valentino Rossi completed his final lap in a blaze of glory.

Organised by Yamaha in partnership with EICMA, “One More Lap” was held on 25 November, the first day the trade fair opened to the public. Making his first appearance at the Milan show, Valentino Rossi spent 1.5 hours meeting with his fans: a fitting farewell and an unforgettable experience for followers of “The Doctor”.

Under the supervision of the Business Development Director Mattia Airoldi and the creative direction of Riccardo Catagnano, Connexia was responsible for the creative concept and naming, visual identity, content production, authorial contributions, direction and production coordination for “One More Lap“, as well as media relations and social media management.

The host of “One More Lap“ Federica Masolin, known for her work on Sky Sport, accompanied Rossi on a 16-year journey back through  his time with Yamaha, tracing the 16 most exciting moments of this winning partnership.

Lin Jarvis, Managing Director of Yamaha Motor Racing, also took to the stage to pay homage to Rossi, presenting him with a small Yamaha PW50 “pink” #46, a gift for Rossi’s unborn daughter.

Éric De Seynes, President of Yamaha Motor Europe, expressed his gratitude, honouring Rossi with a surprise gift: a Yamaha R1 GYTR VR46 Tribute, based on the bike that just won the 2021 WorldSBK Championship.

On the “One More Lap” stage, Pietro Meda, the President of EICMA, personally thanked Yamaha for choosing EICMA to celebrate Valentino Rossi’s extraordinary relationship with the Iwata brand. He also recognised Rossi himself for his motorcycling achievements and his impact on the global motorbike industry.

“We are proud that Yamaha Motor Europe entrusted us with “One More Lap“, an extraordinary and unrepeatable event, which represented Yamaha‘s final farewell to the legendary Valentino Rossi, as well as the brand’s return to major public events. EICMA, the biggest motorcycle exhibition in the world, was the perfect opportunity to celebrate both of these occasions,” explained Mattia Airoldi, Business Development Director at Connexia. “The relationship between Connexia and Yamaha has strong roots reaching back over 13 years. In addition to managing live experiences, we work with the brand as consultants on digital issues, social media and content production. In the years leading up to “One More Lap“, Connexia has been responsible for the last 8 editions of the Yamaha Motor Global Press Première in Milan, all in conjunction with EICMA, and the last two Pan European Dealer Meetings (Barcelona 2016 and Seville 2019).”

“After 2020 slammed on the brakes, Yamaha‘s presence at EICMA represented our desire to be close to our customers and the two-wheeler community,” noted Paolo Pavesio, Marketing & Motorsport Director at Yamaha Motor Europe.” While the media landscape is increasingly complex, with digital channels playing a growing role, the latter should be used to expand the reach of EICMA events, not replace them… Hundreds of thousands of people flocked to the exhibition in Milan last week, demonstrating a clear enthusiasm for live events. Bringing Rossi to EICMA for the first time, with a main event dedicated to him, was therefore the best way to give fans the opportunity to celebrate a global sports icon and a Yamaha legend. Ultimately, it was this brand partnership that saw Valentino through most of the races and wins in his unparalleled career. In terms of the event, Connexia was a natural choice: their relationship with Yamaha dates back to the time Valentino joined our MotoGP team, they know the brand inside and out, and they have held several highly successful live events with us in the past. Expectations were high, and “One More Lap” definitely did not disappoint. Despite the inclement weather, the event was an unforgettable experience for everyone who attended. And it’s not over yet: we are still working on the post-event PR activities.”