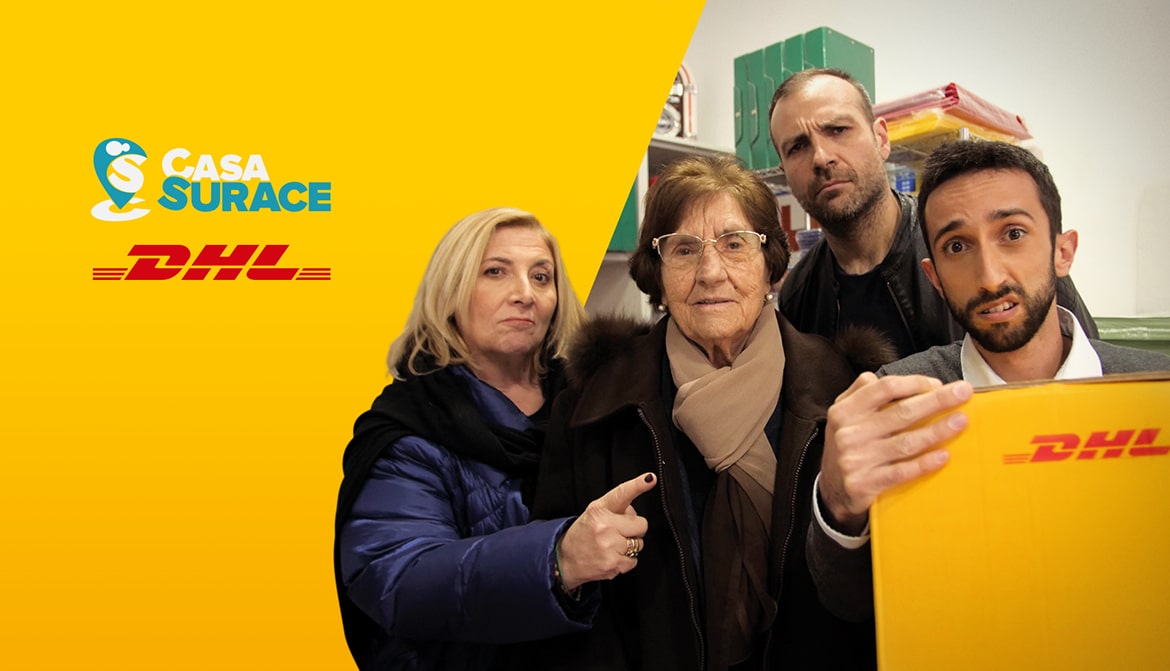 17 April 2019 – DHL Express Italy, the global market leader in international express shipping, has appointed Connexia to tell its story through the countless stories about its “parcels”. Special parcels that are always as unique and priceless for the sender as they are for the recipient. Because DHL is the courier that keeps bonds alive by shipping parcels from one end of the country to the other and delivering all types of goods all over the world, goods that are cherished by their senders.

So what better partner to tell the story of the “symbolic value” of each and every parcel than Casa Surace, the beloved content factory with a rockstar following on social media thanks to its fun videos featuring the relationship between Northern and Southern Italy?

Casa Surace has unwrapped one of its most iconic themes for DHL: THE PARCEL FROM DOWN SOUTH.

“A parcel from down south” is no ordinary parcel or delivery. It’s a bond, a story, whose worth goes far beyond the monetary value of its contents: the cardboard box becomes a message that connects people and DHL is the messenger that makes this connection possible.

The “A parcel from down south” branded content is just the first of three brand communication opportunities that Connexia has designed with Casa Surace to communicate how DHL brings Italy’s North and South close together in 2019.

The video will be available on Casa Surace’s official properties from 17th April. Its story has a natural flow to incorporate the presence of the DHL brand visually and in Casa Surace’s typical tone of voice without sacrificing the spontaneity of the viral content for which Italy’s most social storytellers are famous. Connexia is also working with Casa Surace on a content format for creating and producing five mini-videos for Casa Surace’s social media channels and Instagram Stories; the second phase of the friendly and emotive communication strategy designed for the brand will introduce the third and final step of the activation towards the end of the year with the production of a Christmas video for Facebook featuring all the themes typically embraced by Casa Surace’s sense of humour to convey the value of the interpersonal connection safeguarded and guaranteed by DHL.

“Every day DHL strives to bring people closer to whatever they hold dear: their roots, friends and family. This is why Casa Surace, which is so closely associated with these themes and adored by Italians, seemed to be the right face to tell the story of our vision of “connecting people, improving their lives” in which we believe so passionately.” explained Simona Lertora, the Marketing and Business Development Managing Director of DHL Express Italy. “By connecting people, DHL plays an important role in improving their lives. Global trade depends on logistics, which means that as a leading company we can contribute real values to society. In fact DHL does so much more than just ship parcels: it delivers prosperity when it transports primary needs goods during environmental disasters, it brings health when it delivers medicines on time with completely secure shipments, strengthens the growth of Italy’s economy thanks to exports and imports, and last but not least it brings joy to the hearts of people when they receive one of our iconic yellow boxes, irrespective of what it may contain, as they know that the real message is “we are near no matter how many miles separate us.”

“The continuing partnership with Casa Surace is a strategic choice for Connexia that lends creative depth and originality to our storytelling and strengthens the target consumer’s awareness of the DHL brand, which in turn strengthens the relationship,” said Massimiliano Trisolino, Connexia’s Managing Partner for Strategy and Creativity. “Casa Surace is one of the influencers with the biggest social audience and by using their branded content we have planned a three-step activation for this year which focuses on positioning DHL as the top-of-mind brand when making a purchase. We chose to start our collaboration with Italy’s funniest content factory with the most established and best known tool on their pages: a video in pure Casa Surace style, a viral video featuring their most famous actors launched on Casa Surace’s FB, YT and IG profiles; we decided to create shareable, tongue-in-cheek content in which the bloggers’ themes correspond with the brand presence so we could have an initial strong impact on Casa Surace’s fanbase, which in turn will significantly and immediately increase DHL’s popularity.”