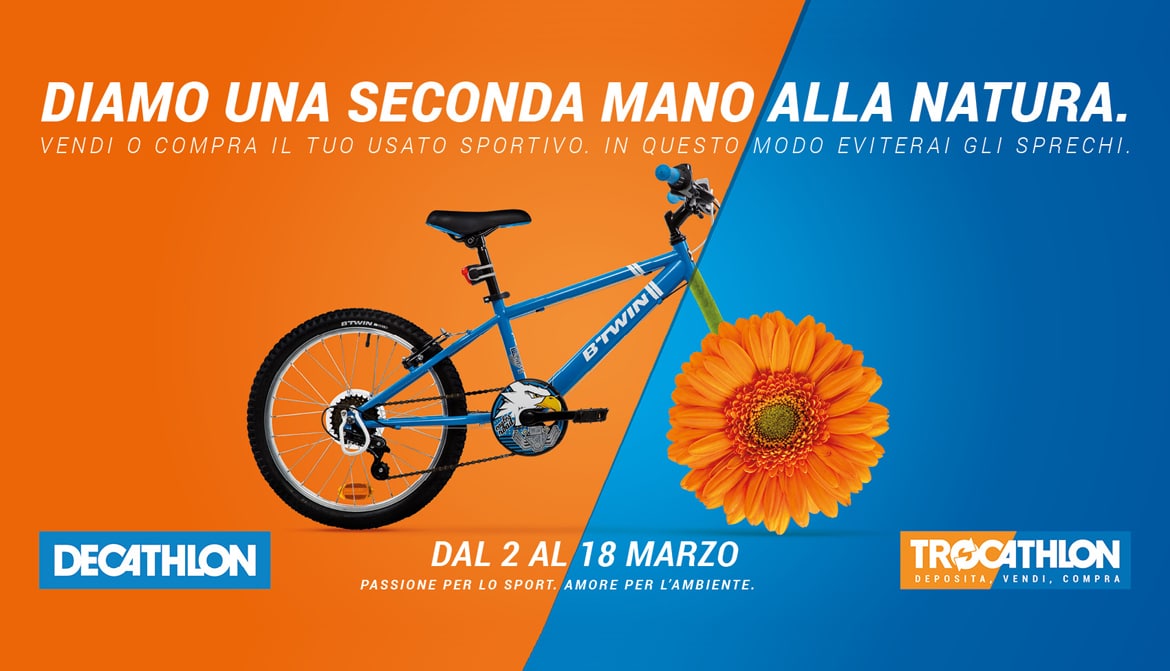 Milan, 7 March 2018 – Connexia, the Doxa Group’s data-driven creativity agency, has created a new campaign for Decathlon, the French company and leading global developer, manufacturer and retailer of sports goods. The campaign is for the 24th Trocathlon, an event created by the sports network to encourage people to reuse second-hand items by buying and selling used goods without charging any fees. Held in 110 Decathlon stores from 2nd to 18th March 2018, the initiative is only open to Decathlon card holders and also hopes to help reduce our impact on the environment by promoting more sophisticated circular economy models.

To launch the 2018 Trocathlon, Connexia has created a national campaign that reflects Decathlon’s constant commitment to implementing their “everyday low price” philosophy and making sports accessible to everyone.

With one short message, the campaign’s claim – “Let’s give nature a second hand” – sums up the concept of saving money, an essential part of the second-hand market, and the French brand’s commitment to safeguarding the environment, both themes featured in the creative visual. Connexia also created a script for the Trocathlon radio commercial which was broadcast in Decathlon stores.

The 2018 Trocathlon started on Friday, 2nd March, in all affiliated stores and enables all Decathlon customers to sell their used sports items in stores until 16th March without paying any fees. The sports items and equipment are available for purchase between 2nd and 18th March. If all the customer’s items have been purchased by the end of the initiative, the customer receives a coupon for the value of however much was made from the sale of their second-hand goods.

“With the campaign created by the Vasta-Aricò creative team to promote Decathlon’s 2018 Trocathlon, Connexia has successfully found an innovative way to faithfully interpret the values of one of the events that means the most to the French brand, which has worked hard for years on promoting inclusion and making sport more accessible, also by implementing a policy of keeping prices low,” said Massimiliano Trisolino, Connexia’s Chief Strategy Officer.