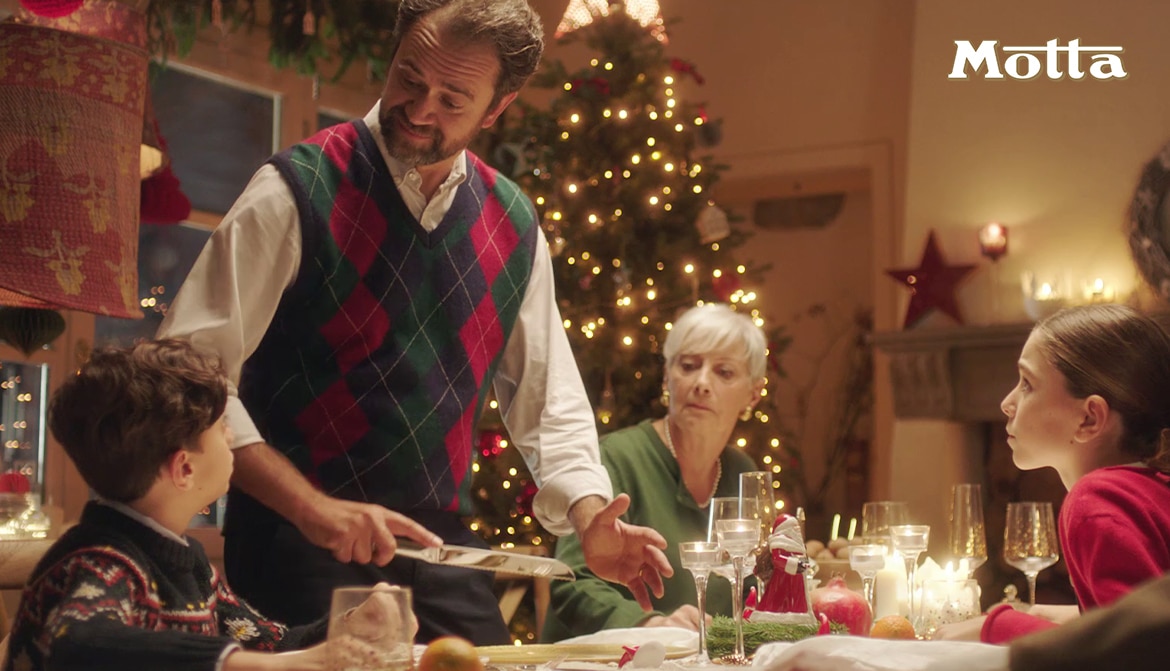 2 December 2019 – What would Christmas be without Panettone? This impossible question sets the theme for the new Motta Christmas campaign  “It’s more like Christmas with the Original Panettone”, aired on TV and online from 1 December.

Three 10-second TV ads and eight others, created by Connexia in collaboration with Indiana Production, to illustrate what would have appeared on Italian tables if Motta had not invented, 100 years ago, the Panettone as we know it today, tall and soft. And the answer? It’s simple: sweet nothing!

The story told in the new Motta Christmas campaign, which arrived on screens in December, is that of a family faced with the most traditional of Christmas dinners. In one of the ads we see the mother bringing an empty tray to the table, in another the father slices a large knife into nothing, while the third ad shows the diners trying to bite into…nothing! The look on their faces says it all: what a disappointment without the panettone. Luckily, Motta thought to invent it 100 years ago, and it then magically appears on the tray, in front of the father and in the hands of the guests, putting a smile back on their faces as they start celebrating Christmas properly, because “It’s more like Christmas with the Original Panettone”!

The tone of voice of the Motta campaign becomes even more ironic online, with fun depictions of “nothing” taking the place of the Original Panettone on the tables of Italian homes: eight ads all to be discovered and shared on social media.

To support the campaign, scheduled by PHD Italia on TV and online from 1 December, the intention is also to set up a group of web influencers, tasked by Noesis Group to interpret, each in their own particular style, the claim “It’s more like Christmas with the Original Panettone”.

For Christmas 2019, the website Mottamilano.it – designed and created by Connexia – has also been completely upgraded: a new and intuitive interface to not only showcase all the products that, along with the Original Panettone, will be appearing on Italians’ tables at Christmas, but also to tell the story of the Motta brand in an exclusive flipbook.

The countdown to 25 December has officially started, without forgetting that only one thing makes Christmas truly Christmas: the Original Motta Panettone!